Tonight, before brushing her teeth and going to sleep, Stella might:

About this post: I wrote this on my phone, lying in bed, while watching Sabrina the Teenage Witch on Netflix tonight. I took the photo while walking past a unique shop earlier this evening. This is all part of a personal challenge to create daily this month. I am tired. Good night.

Steph: Hello. How may I help you?

Steph: Really? Why should I choose you?

The Candidate: Because I am the best. Believe me.

Steph: Are you really? I am unaware of your qualifications. Who said so?

The Candidate: I am telling you to believe me.

Steph: Hmm… Will you work to help improve ABC or XYZ?

The Candidate: Perhaps, if it those things are in my best interest.

Steph: How do you consider the opinions, needs, reality of your challengers? And those of their supporters?

The Candidate: I do not agree with them. I will not consider their needs. I will ignore their reality. They will bend to my will and feed my appetite for glory.

Steph: What do you plan to do if you are elected? Do you have a plan to achieve your goals?

The Candidate: Of course. I plan to do lots of things. Of course, they all may not be of concern to you directly.

Steph: Of course. Tell me about your plan. Does it include ABC? Have you considered XYZ? What sets of data did you resource for your study? When? How? Why? Who? …

The Candidate: Oh, well, we don’t need to go into such detail. You just need to trust that when I get into office, I will work to protect the interests of my constituents.

Steph: You will? I am one of your constituents. Will you work to address my concerns?

The Candidate: Well, I can take your concerns under consideration. In the meantime, how much can you donate to my campaign? May I count on your vote?

The featured image for this post is a sketch I created for one of my posts written in 2011. Read “Sideburns are dark, scripted comments about character.”

I am taking part in The Write Tribe Festival of Words #6. Day 6 of the Write Tribe Festival of Words #6 and today’s prompt is: Feature a guest – a guest post / an interview. While I did not secure a guest writer or interview a real person, I outlined the high points from what I perceive the eternal interview with the candidate from hell. #writebravely #writetribe #festivalofwords

“Walk with me, Stella,” purred the blue cat. “Let me share something with you.”

Still grappling with the reality of a world with talking animals and no sun, Stella simply nodded and kept pace with her new azure companion as it shared with her a cautionary tale.

Stella listened for hours and learned of the continuing changes to this world’s landscape and the curious population.

“Our forbears suffered for thousands of years as their lives were drenched in greed, hate, and despair. Eventually, a mighty civil war fractured our democratic republic,” the cat told Stella as they walked.

Stunned yet curious, Stella wondered aloud, “How did this happen?”

The cat flicked its bushy blue tail and continued, “Humans grew increasingly hostile to outsiders. They began to fear and distrust their neighbors and build barriers between regions. Their paranoia increased with their isolation as did the wars. Clans continued to live separately, limiting their bloodline, denying progress made by others, and eventually their societies collapsed under the weight of such historical ignorance.”

Stella stopped to consider the folly of the humans and the azure feline with glowing opals looking up at her. She quietly asked, “So, what happened to the humans?”

“During those dark ages, as borders were constantly being redrawn with blood and as their youth continued to lose their lives, humans eventually lost hold of their dominance within the animal kingdom. And that is also when our world was visited by those from the first dominion.”

Stella halted and looked up at the chartreuse sky. “You mean there is life out there?”

“Of course. There has always been. But more to the point, they have returned.”

Stella stopped and asked, “How do you know?”

“Simple,” the cat purred. “They have sent a new ambassador.”

The cat smiled and looked towards Stella’s door floating along the glistening horizon. “Yes. Here. Now. She landed in your dining room just moments ago.”

Today’s post is the fifth and final act in this particular story, “Stella’s Visitor.”

I composed this post last night while watching TV in bed before I created the image using the ArtRage app on my tablet.

“Hey there, Steph! This is …” began a voicemail that grabbed my attention as I recognized the voice immediately.

Once a boyfriend and now just a “friend” on social media, Fred had a special place in my heart. He was my first. My first love, my first…well, you know.

Listening to the recording, I struggled to decipher the rest of the message to only pick out portions, “I’m sorry…. I should’ve told you months ago…..Bye.” No matter how many times I listened, I could not hear what he had to say.

I thought, “Well, that was a fine ‘how do you do?’” followed by “Seriously, after all this time why would he call me?”

While trying to figure it out, I got lost thinking about our shared history.

Our relationship had been brief and awkward. He had a life of privilege filled with material wealth. My life had neither. The only thing we had in common was where we attended school. Even that was due to his transfer from the public school in his neighborhood to that in mine.

If I remember correctly, that is how we met.

Every morning, on his way to school, he drove through my neighborhood. Most times, he would pass me as I walked to catch the bus. After a couple weeks of this routine, he tapped his horn as he passed. A simple “beep, beep!” from a teenage boy seemed like an innocent “hey, there!” to this naive girl.

Eventually, his daily greeting included a smile and a wave and an actual “hey, there!” hollered out his window as he drove by. It didn’t take many more passes before he stopped and offered me a ride to school. There begins our story of an odd-alcohol-induced-but-basic version of boy meets girl.

I now realize that whole scenario sounds creepy now, but in the early 80s it was the stuff of idyllic teen dramas. I’m not one for reliving my teen angst, so I will spare you the drama or even a John-Hughes-like version.

It’s just the backstory. Now, to the reason for his call…

©2014 Stephanie Abbott. All rights reserved.
____________
Sunday, November 9, 2014. Today’s cliffhanger was inspired by the prompt “Bad Signal” from the folks at Daily Prompt: “Someone’s left you a voicemail message, but all you can make out are the last words: ‘I’m sorry. I should’ve told you months ago. Bye.’ Who is it from, and what is this about?”

I doodled “Hey There!” using ArtRage on laptop. This graphic is simple because my hands are swollen and cramped this morning. Trying to draw using a clunky old mouse is bit painful. Typing out the story? Not so much.

*His name was not Fred. 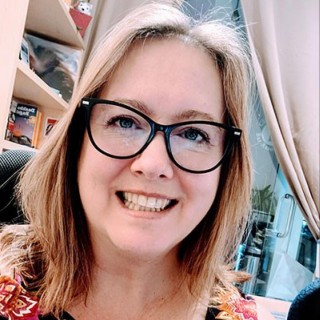